Skip to content
Cramond beach is THE posh beach in Edinburgh. You can find it to the north-west of the city at the mouth of the River Almond where it enters the Firth of Forth.

There’s a huge history of this area that goes back to Romans. If you interested you can read more about it on Wikipedia. I wont repeat it hear.
The latest that I have read just at the beach was when In 1997 the Cramond Lioness was uncovered in the harbour mud by a local boatman. It was identified as a sandstone statue of a lioness devouring a hapless male figure, probably one of a pair at the tomb of a military commander. The statue was displayed in the Museum of Scotland in Edinburgh. I think this is pretty cool!
However my intention to go there was because the sun was out and we know this is not an every day moment in Scotland. The drive from the city takes max 15 minutes or you can take the bus number 41.
The place is very peaceful and clean. Many people walking around with dogs ( well jealous) or kids or just alone or with someone. Could be a very romantic walk at sunset! Might one day my fiancé will take me back and pretend to be romantic. Hmmm….
Anyway. The beach is not big but nice and sandy. You can walk around on the path or just let your feet feel the sand. Watch out for not wanted items though!
It’s also  – do keep an eye on the tides though as it is possible to get stranded on the island. That would be something different! However I haven’t been in the Island yet I will! Just have to make sure I can come back! There’s a ‘timetable’ that you can check so you know actually what you’re doing.
There’s a boat club as well with a pretty wee harbour. I was watching people who was about to come back from the sea and I really really want to do the same in 20/30 years! They seemed so happy and in my opinion that could be something amazing to do when you are older. I guess I have to start saving seriously!

We had a walk next to the harbour, checked out the club and walked into a wee walk path that heads to a waterfall. It’s a tiny one but still a waterfall! The only thing it was really annoying me…the water! It is so dirty! It’s proper brown like a chocolate! It’s actually looks like a big chocolate fondant…hmmm I’m hungry! 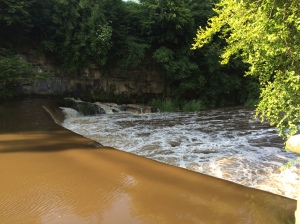 Back the way we found a little cafe ( I think it calls Cramond falls ) that is under construction to become a restaurant. What an idea! The owner lady explained to me that she makes everything by herself. I mean everything. Homemade. I had her scone. What a scone! Respect! 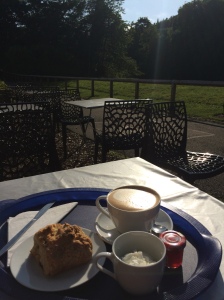 This beach is not the place I’m going every week or month because it’s special. Something about it is special and special places don’t deserve to be ruined with every day routine!

” As long as habit and routine dictate the pattern of living, new dimensions of the soul will not emerge “ – Henry Van Dyke

I am a travel addict therefore in my brave moment I have set up my own independent travel agency. I am able to organise holidays, travels or weekend getaways. Learning every day and getting more and more suppliers to work with me. I am a wine and champagne lover. I LOVE visiting vineyards! Also I have a dog who keeps me granted and make me to go for big walks to enjoy Scotland's beautiful nature. View more posts

This site uses Akismet to reduce spam. Learn how your comment data is processed.